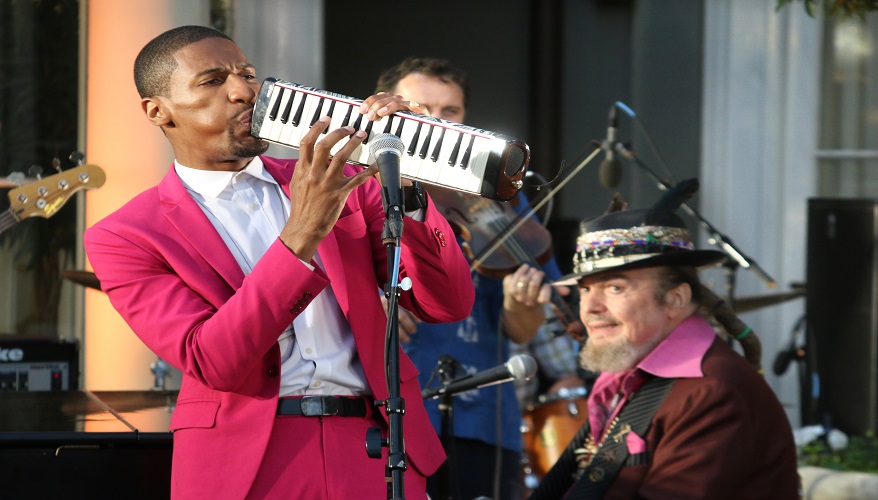 Music & Mountains of the South

This itinerary explores the music and mountain areas of the Deep South Region. Begin your time here in Atlanta, which has been named the 'next international city' and is a great place to begin your adventure.

See the Appalachain Mountains in Fort Payne and view waterfalls along Lost Falls Trail. In Muscle Shoals, you can visit the Alabama Music Hall of Fame, where Aretha Franklin, Rod Stewart and The Rolling Stones are all featured after recording music here.

Travel on to Memphis, where rock 'n' roll was born and Nashville, the 'Music City of the USA'. From here, visit Gatlinburg and the Great Smoky Mountains National Park. Fans of Dolly Parton will not want to miss Dollywood.

Make your way back to Atlanta for your flight home via Asheville and know that you have truly experienced the musical and natural highlights of this part of the world.

Arrive into Atlanta and after collecting your hire car transfer to hotel. Atlanta has been dubbed everything from the "capital of the new South" to "the next international city", and is a great place to stay for several days before you eventually move on to discover the other delights of Georgia and neighbouring Alabama. If you're not too tired this evening there's a chance to sample some of the cultural attractions as well as many fantastic bars and world class restaurants that this cosmopolitan city is now famous for.

Depart Atlanta today after breakfast and head on to Chattanooga. Located on the Tennessee River and situated in Hamilton County, Chattanooga is a true tourist treat. The city is home to approximately 156,000 residents and offers visitors the Tennessee Aquarium, the International Towing & Recovery Museum, and the Chickamauga-Chattanooga National Military Park.

Other sights to see include the African-American Museum and Regional History Museum as well as the classic Chattanooga Choo Choo. The city's riverfront area and Lookout Mountain also provide visitors with several restaurant, bar, and shopping alternatives.

Although Chattanooga offers plenty of urban attractions, the area is a favourite with lovers of the great outdoors too, as the city is near to the Tennessee Wildlife Center, Booker T. Washington State Park, Ruby Falls, Nickajack Lake, and Chickamauga Lake.

After enjoying Chattanooga, travel to Fort Payne in the Appalachian mountains of North East Alabama to experience the state's great outdoors. Take a hike into a deep canyon or through the forests along some 12-miles of trails at De Soto State Park. View waterfalls along the Lost Falls Trails and don't miss the breathtaking De Soto Falls. Go underground to the "Looking Glass Lakes" at Sequoyah Caverns.

Kayak the raging Little River at Little River Canyon National Preserve or enjoy the tranquility of the area on horseback on half and full day rides. Alabama's Shady Grove Dude Ranch offers Guided mountain trail rides and tours which include a meal cooked at the Roundup.

Travel a short distance to Huntsville, home of the U.S. Space & Rocket Center , the world's largest space attraction. Simulators let you experience a space shot, G-forces, and weightlessness onboard a spacecraft. Tour the grounds of the U. S. Space Camp Training Center where kids of all ages go to experience life in the final frontier. Next door is America's largest seasonal butterfly house at the Huntsville Botanical Gardens. Huntsville's downtown area hosts Washington Square, a mini entertainment district with plenty of live music. Stop by 'Humphreys' for Blues, Rock and Bluegrass and Crossroads Cafe for some of the best live music in the South East. Sammy T's Music Hall is another one of the best known music venues in the city. You can even take a gondola ride at Bridge Street Town Centre, a new shopping and entertainment district.

If there's time while you are in Huntsville, take time to visit Alabama's Constitution Village where a step inside the fence will transport you back to 1819, when 44 delegates gathered in a vacant shop to organize Alabama as the 22nd US State. The little village complete with a cabinetmakers shops, law office, post office and sheriff's office has been impeccably preserved. More of Alabama's heritage is featured at Burritt on The Mountain, where Dr. Burritt's eclectic mansion is surrounded by the original barnyard filled with animals.

Your next stop offers another opportunity to celebrate Alabama's Year of Music as you travel to the northwest corner of Alabama to the four adjacent cities of Florence, Sheffield, Tuscumbia and Muscles Shoals. Starting in the 1960s, top artists from around the world including Aretha Franklin, Lynyrd Skynyrd, Rod Stewart and the Rolling Stones recorded their music in Alabama making Muscle Shoals the "Hit Recording Capital of the World." You can tour the Alabama Music Hall of Fame and the historic recording studios of FAME and the Jackson Highway location of Muscle Shoals Sound.
The most complete understanding of music in Alabama can be found at the Alabama Music Hall of Fame in Tuscumbia where memorabilia from careers of Alabamians such as Lionel Richie, Emmylou Harris, the group ALABAMA, The Commodores, Nat King Cole, W.C. Handy, Hank Williams and others are found. The Hall of Fame has its own small recording studio where you can sing over pre recorded songs from the Muscles Shoals Sound era. The Muscle Shoals area had its first international smash with Percy Sledge's "When A Man Loves A Woman" recorded at Quin Ivy's Studios in Sheffield. Muscle Shoals Sound Studio in Sheffield is also a part of the music history of the area.

Born in Florence, Sam Phillips became a producer, record label owner and the talent scout who is credited with discovering both Elvis Presley and Johnny Cash. Phillips is also regarded as the Founding Father of Rock 'n Roll. Be sure to check out The Swampers Lounge at the Marriot Shoals Hotel & Spa.

The Father of the Blues, W.C.Handy, was also born in Florence. Handy's birthplace, a simple log cabin, is part of the W.C. Handy Home and Museum. Each year, the Shoals area hosts music festivals honoring both Phillips and Handy.

Welcome to Memphis, the place where blues came of age and where rock & roll was born. We recommend you park the car at your centrally-located hotel and walk over to Beale Street for a night of great music. Beale Street was a key arena in which bluesmen from BB King to Howlin' Wolf made their names. BB King's Blues Club is now one of Beale Street's best clubs.

Today tour Graceland and Sun Studios or visit the exceptional Rock 'n' Soul Museum in the new Gibson Guitar factory. Here you'll learn about the incredible contribution Memphis has made to blues, soul and gospel music.

If you've time later today, drive out to the Full Gospel Tabernacle where Al Green is the resident preacher or explore the city's many musical sites. You might choose to visit the National Civil Rights Museum housed in the old Lorraine Motel, the place where Dr Martin Luther King was assassinated. It's one the most moving and insightful museums in the States.

From Memphis go east on the I-40 through Jackson across the Tennessee River to Nashville, 'Music City USA', home of country music and some of America's biggest recording companies. Nashville is the perfect place to visit on any trip featuring music.

Even though country music began in the hills and the hollers of Southwestern Virginia and Willie Nelson and Waylon Jennings once tried to take it to Austin, Texas, Nashville has been the Capital of Country Music since 1926. That's the year that the Carter family (as in June Carter Cash) produced the first recordings with a true country sound.

The Grand Old Opry began as a barn dance in the studios of WSM Radio before taking up residence in Ryman Auditorium (a Nashville must-see) that is now known as the "Mother Church of Country Music." Other must sees include the Country Music Hall of Fame, historic RCA Studio B where great like Elvis and Chet Atkins recorded, and the Second Avenue Historic District. Tootsie's Lounge is the only honky tonk still open on Lower Broadway. Authentic Nashville sound can also still be heard in Printer's Alley.
You'll find Music Row lined with recording studios and music producers just outside of downtown. Further out, Opryland is the new home to the Grand Old Opry, nestled in a massive resort complex.

Departing Nashville today after breakfast, your next stop will the Great Smoky Mountains. The most visited national park in the U.S., Great Smoky Mountains National Park encompasses some 800 square miles of protected forest along the border of North Carolina and Tennessee.

At the heart of it all is Gatlinburg, an ideal home base from which to explore the park's hundreds of hiking trails, go river rafting, fishing, horseback riding, wildlife viewing or embark on numerous other outdoor adventures. After climbing mountains, ride an elevator 342 feet to the top of the Gatlinburg Space Needle for stunning views of the Smokies and the surrounding area. Dolly Parton fans won't want to miss Dollywood, located in nearby Pigeon Forge. This large amusement park features rides and attractions inspired by the popular country singer's love of music, the Smoky Mountains and good old-fashioned southern hospitality.

En route from Gatlinburg to Asheville in North Carolina, first make a stop in Knoxville – Tennessee's third largest city. Home to a rich arts community, Knoxville is host to many festivals throughout the year. Its contributions to old-time, bluegrass and country music are numerous, from Flatt & Scruggs and Homer & Jethro to the Everly Brothers.

For the past several years an award-winning listener-funded radio station, WDVX, has broadcast weekday lunchtime concerts ofbluegrass music, old-time music and more from the Knoxville Visitor's Center on Gay Street, as well as streaming its music programming to the world over the Internet. Continue your journey to Asheville, where you will spend tonight and have an opportunity to enjoy some of the Blue Grass Music this area is famous for.

Enjoy a last morning in the Asheville area before heading back to Atlanta tonight to catch your flight home.

We can also offer this itinerary in a wide range of other accommodation types, including superior hotels, character properties and small inns.