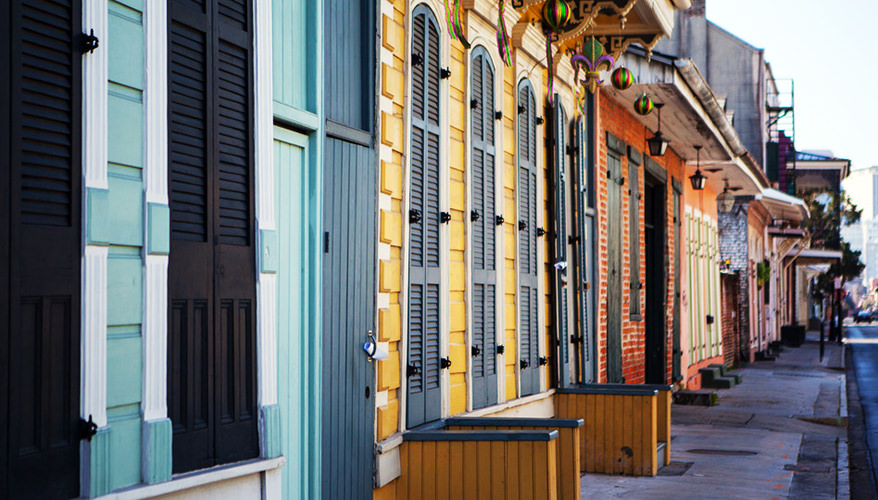 "Sweet Home Alabama", the very name conjures up an image of a state which epitomises the easy going, laid back lifestyle long associated with the Deep South. Nestled in a region of diverse scenery, Alabama sweeps from the foothills of the Appalachian mountains in the North to the white sandy beaches of the Gulf Coast in the South.

As a result of its involvement in two of the most momentous events in U.S. history, the American Civil War and the national civil rights movement, Alabama has a fascinating history which is played out in key museums and landmarks throughout the state.

Alabama also boasts music legends like Hank Williams and W.C. Handy 'Father of the Blues'. Jimmy Buffett grew up here and many International superstars including Aretha Franklin, Lynyrd Skynyrd, Otis Redding and the Rolling Stones recorded here in a region called Muscle Shoals on the banks of the Tennessee River during the 60s and 70s.

Follow in the footsteps of history makers like Dr Martin Luther King Jr. and also celebrate some of America's music superstars who blazed a trail through the Deep South during this 14 night tour. Your adventure begins in Atlanta, winds through Nashville, takes in beautiful Alabama and ends in New Orleans.

Arrive in Atlanta, a vibrant and exciting city. Home to the 1996 Olympic Games and world class attractions such as The World of Coca Cola Museum and CNN Headquarters and Studio, Atlanta is a modern city with a historic character.

Visit the Atlanta History Center and the Martin Luther King Jr. Historical Site. Also don't miss the former home of Margaret Mitchell – author of 'Gone with the Wind' or the Jimmy Carter Library and Museum.

Move on today to Nashville, home of Country Music and the Grand Ole Opry. Visit the museum of music giants, the Country Music Hall of Fame followed by some fabulous live music in one of many bars and lounges in 'The District', Nashville's downtown entertainment area.

Day five takes you to a region in the northwest corner of Alabama known as The Shoals, a cluster of cities - Tuscumbia, Florence, Sheffield and Muscle Shoals. Begin your stay by visiting the Alabama Music Hall of Fame in Tuscumbia and don't miss some of the most influential recording centres in America, the Muscle Shoals Sounds Studio and the FAME Recording Studio known for their huge contribution to rock, country and R&B music throughout the 60's and 70's. Both studios were used frequently by superstars like Aretha Franklin, The Rolling Stones, Paul Simon and Otis Reading who all made classic recordings here and are still active and open for public tours (check ahead for visiting times).

A short drive brings you to Alabama's 'Rocket City', Huntsville. A two night stay here provides an ideal opportunity to sample some of its exciting day and night time entertainment.

Located in the heart of Alabama's Mountain Region, Huntsville hosts numerous music events throughout the year including one of the state's largest - the Big Spring Jam every September. The city's downtown area has a mini entertainment district with venues like Crossroads Cafe and Humprey's showcasing Blues, Jazz, Folk and Rock Music. For shopping and dining, the new Bridge Street Town Centre features over 70 upscale shops and restaurants, a 10 acre lake with gondola rides, water craft rentals and park areas.

By day, visit the U.S Space and Rocket Center, the Earth's largest space museum featuring a full size Space Shuttle, a Saturn V rocket and the actual Apollo 16 capsule. Families can thrill to interactive rides and flight simulators and they can also attend U.S Space Camp. Save time for the Huntsville Botanical Garden where you can enjoy the Alabama sunshine whilst exploring 112 acres of flora and fauna.

For a different perspective, go back in time to 1819 by visiting Alabama Constitution Village, the actual site where forty four delegates gathered to forge the way for Alabama's Statehood. Become a part of Alabama's history as villagers dressed in period clothing take you through eight reconstructed Federal style buildings. Another living history museum, Burritt on the Mountain, is a remarkable 14 room mansion built in the shape of an X and is insulated with 2,200 bales of wheat straw. The Historic Park contains restored farm buildings which interpret rural life during 1850 and 1900.

Birmingham, home to grits, gravy, great culture and gracious folks is a fabulous stop for the next two nights. Its Alabama's largest city, known for its diversity and overlooked by Red Mountain. As well as hosting the famous City Stages Festival every June, a 3- day event featuring 150 acts, Birmingham claims to be the Capital of American Idol due to its reputation for producing a string of talented vocalists. Two of the winners, Ruben Studdard and Taylor Hicks plus runner up, Bo Bice, all hail from here.

Indeed, it's hard to escape the music in this playful city. Throughout the year, Jazz echoes from downtown nightclubs in places like Ona's Music Room and the Blue Monkey. The Five Points entertainment district has music of all types as well as great dining. Folks in Birmingham love to eat and those who visit here will get a taste of some fabulous cuisine whilst enjoying all the arts that the city offers.

Jazz enthusiasts would do well to visit the Alabama Jazz Hall of Fame which pays tribute to great artists with ties to Alabama like Nat King Cole, Duke Ellington and Lionel Hampton.

Birmingham also has a fantastic range of museums ranging from Native American and Renaissance art to one that documents one of it's most important roles in the history of Civil Rights conflict and reconciliation, the Birmingham Civil Rights Institute. Nearby Kelly Ingram Park which was the staging ground for Civil Rights rallies and demonstrations during the tumultuous 1960s is also a moving and educational place to visit.

The Barber Motorsports Park and Barber Vintage Motorsports Museum are a must for motor enthusiasts and the Birmingham Botanical Gardens and Zoo are just some of the city's other great attractions.

Moving south to Montgomery, Alabama's State Capital is the birthplace of both the Civil War and Civil Rights. The Civil Rights Memorial and Rosa Park's museum should not be missed. Country Music lovers can visit the Hank Williams Museum which documents the life of this famous music pioneer known for such classics as "Hey Good Lookin" and "Cold Cold Heart".

The historic port city of Mobile, which is one of the oldest cities in America, is your home for the next two nights. It boasts the original Mardi Gras which started in 1703 and is still celebrated every year two weeks before lent as part of a calendar of musical events. Visit the Mobile Carnival museum for an insight into the fascinating history of the revellers, brilliant costumes and colourful floats. Mobile was also the scene of an important naval struggle in 1864 when the outnumbered Confederate fleet were forced to surrender and this is documented at the Mobile Museum which details over 300 years of the City's history.

Mobile Bay is an exclusive entertaining, indulgent and relaxing destination. It features delicious seafood and an array of bars, restaurants and live music venues – just what you would expect from Jimmy Buffet's hometown. The Lo Da Entertainment District has over 20 establishments with live music on different nights of the week. Stop by 'Veets' for a late night drink and live bands. Felix's Fish Camp overlooking Mobile Bay has entertainment most nights and great views over the water. If you're visiting in the Fall, you'll be lucky enough to see the city's 3 day BayFest Music Festival. This has jazz as it's main ingredient but there is continuous music for every taste.

Spot of Tea on Dauphin Street is a favourite for breakfast and a nice place to stroll around as you admire the buildings on Cathedral Square. A drive through the nearby Oakleigh Garden Historic District allows you to take a look at some of the city's finest late 19th century residences.

During your two night stay, take a trip a few miles down the road to Gulf Shores and Orange Beach which provide 32 miles of pristine white sandy beaches along the Gulf of Mexico. Live bands perform at beachfront bars like the Florabama, Pink Pony Pub and The Hangout.

Finish your tour in the exotic city of New Orleans which overflows with history, culture and an energy that reverberates throughout the city. Aside from the legendary Bourbon street nightlife, there is a wealth of experience for all the family in the form of boat swamp tours, street car rides, the National World War II museum, the Aquarium, Mardi Gras World and more.

After a last look around New Orleans later today you will drop off your hire car at the airport before you board your overnight flight home.

We can also offer this itinerary in a wide range of other accommodation types, including superior hotels, character properties and small inns.