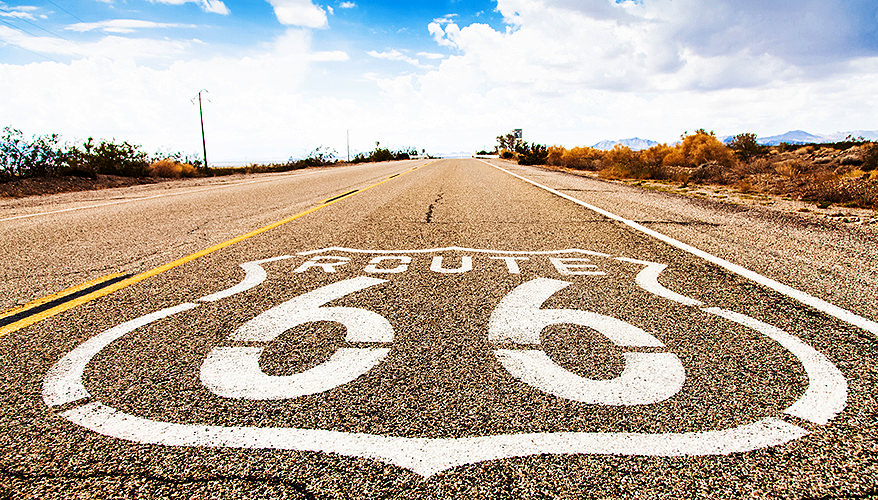 The mother of all fly drive routes, Route 66 is known as 'The Mother Road'. Established on November 11th 1926, Route 66 is one of America's most famous roads. Winding 2400 miles from Jackson Boulevard and Michigan Avenue in Chicago to Los Angeles, it followed the old trails laid out by the early explorers and railroad, through some of the most romantic and celebrated portions of the American West.

Once referred to as the Main Street of America, and dubbed The Mother Road in John Steinbeck's 'Grapes of Wrath', Route 66 was the first all weather highway that linked Chicago to Los Angeles, and travelling Americans embraced it with much enthusiasm. Eventually, the USA moved on to the national highway system moving people and goods across the country much faster, so consequently towns faded and the historic road became obsolete. In 1985 whatever was left of Route 66 was officially decommissioned, but even today this famous road still captures the hearts and imagination of travellers who find driving down Route 66 is still a magical experience.

Landing in Chicago, you'll soon find yourself immersed in the largest city in the Midwest, alive with commerce, packed with great architecture, laden with the arts, and topped off with the Magnificent Mile, one of the world's glitziest shopping boulevards. Start with breakfast at Lou Mitchell's where the original Route 66 began, before you take a trip with the Chicago Trolley Company to familiarize yourself with the city. The more than 300,000 masterworks at The Art Institute of Chicago are a must see. The Museum of Science and Industry lets you get up close and personal with a coal mine or a German U-boat. Before you leave the windy city, be sure to eat a meal at McCormick & Schmick's.

Chicago's premier Museum Campus of world class facilities includes the Shedd Aquarium, the Adler Planetarium and the Field Museum, home of the largest, most complete Tyrannosaurus Rex ever discovered. You can get a great view of the city from the Sears Tower, the Skydeck Chicago and The John Hancock Observatory with it's sweeping views spanning the 4 states of Indiana, Michigan, Wisconsin and Illinois.

The route to Springfield, Illinois, is lined with old-fashioned gas stations, drive-in restaurants and original signs. Begin at Chicago’s Buckingham Fountain and en route discover quirky landmarks from a bygone era, from small-town diners to drive-in movie theatres to great old gas stations. In Pontiac, visit the Old Log Cabin, which has been serving meals since 1926, or the Dixie Trucker’s Home in McLean, which has earned a reputation as the best truck stop in America with its generous portions, fabulous apple pie and a Route 66 Museum.

Springfield is one of the most visitor-friendly cities in America, offering adventure, history and fun. Take a journey through Abraham Lincoln’s life at Lincoln’s New Salem State Historic Site, the Lincoln Home National Historic Site and the Old Capitol. Opening in 2005, the Abraham Lincoln Presidential Museum is a state-of-the-art experience blending historical detail with innovative technology to present the story of Lincoln’s life. Don’t forget to stop at Springfield’s traditional Route 66 diner, the Cozy Dog Drive Inn.

Continue to St Louis, America’s great ‘gateway city’. Check in at your hotel then spend the evening roaming the funky Soulard district, home to one of the best blues scenes in the US. Look out for local legends Henry Townsend and Johnnie Johnson. Ride to the top of the amazing 630-foot Gateway Arch which dominates the city’s skyline. Then visit Scott Joplin’s House where the ragtime innovator penned such hits as ‘Maple Leaf Rag’ and ‘The Entertainer’. Later leave the music landmarks to explore some of this great city’s more mainstream attractions like the superb art galleries, parks and the eccentric City Museum. St Louis is a major city and one which has a great deal to offer visitors. Or you might choose to use this ‘extra’ day to relax before hitting the road again.

Springfield, Missouri, is much more than just a gateway to Branson. It’s also the undisputed Ozark cultural crossroads – where cappuccino, concrete and cowboys come together in a city rich in American history, fine arts, and pop culture. As well as being the birthplace of America’s asphalt kicking Mainstreet, Route 66, there is an abundance of historic sites, fine art musuems, botanical gardens and aquariums.

Oklahoma City was created in a matter of hours on April 22, 1889, after a single gunshot signalled the opening of the land to white settlement. Nowhere will you find a greater concentration of Oklahoma City’s modern-day urban vitality than in Bricktown, an early-day warehouse district transformed in the last decade to become the fastest growing entertainment district in the Southwest. Just east of downtown, the area is home to mile-long riverwalk-style canal, AAA baseball stadium, shopping and some of the city’s best restaurants and most active night clubs. Bricktown has something for everyone. The city’s western, pioneer spirit can most easily be seen in some of Oklahoma City’s top attractions, like the National Cowboy and Western Heritage Museum, Remington Park Race Track, Stockyards City, Frontier City Theme Park, and the Red Earth Indian Centre. Each reflects the strong ties this area has with its western heritage.

Often called the Capital of the Panhandle, Amarillo survived the death of Route 66. As you follow Amarillo Boulevard east, there are more and more ghost remnants, bits and pieces of the now legendary Mother Road. Defunct business with vintage cars parked out front, occasional arrows pointing to a shell of a store. Don't miss the Historic and National Park Service Preserved Triangle Motel (circa late 1940s) which was named after the odd-shaped lot where Highways 60 and 66 met.

Just West of Amarillo lies the legendary 'Cadillac Ranch' where 10 cadillacs have been half buired nose-down as a homage to the road. Stop at Midpoint cafe in Adrian, located at an equal distance to both Chicago and Los Angeles. The Pecos National Historic Park is a prime location for hiking and horse-riding and offers beautiful views across the Pueblo ruins located here, which date back as far as the year 1200. The Theodore Roosevelt Rough Riders Memorial & City Museum is free and offers a number of artifacts from the Spanish American War, focusing on the Rough Riders and the Santa Fe Trail. Be sure to stop off for coffee at the World Treasures Travelers Cafe, dubbed the best coffee house in Las Vegas.

Founded in 1706 by the Spanish, who stayed until 1821 and ruled by Mexico until 1846, America governed New Mexico from 1846 until it became a state 1912. The territory sided with the Confederates during the Civil War. Walking through Old Town Plaza, you'll be thankful that the Spanish required a plaza in every city. Serenity reigns in quiet hidden patios, winding brick paths, gardens and balconies.

Be sure to visit Acoma Sky City Cultural Center and Haak'u Museum, where you can learn about the rich cultural traditions of the Acoma people and their resiliency. Renowned Acoma pottery and never before displayed textiles are featured at this brand new facility. A trip on the Scandia Peak Tramway transports you high above the deep canyons and spectacular terrain surrounding Albuquerque. An observation deck over 10,000 feet up affords a panoramic view over the Rio Grande Valley and the Land of Enchantment.

Continuing on Route 66, you can also check another National Park off your list today, by visiting the Petrified Forest National Park in Holbrook. With one of the world's largest and most colourful concentrations of petrified wood, multi-hued badlands of the Painted Desert, historic structures, archeological sites, and displays of over 200-million-year-old fossils, this is a surprising land of scenic wonders and fascinating science. In the museum, the Park has archeological objects from Anasazi, Mogollon, and Sinagua sites; ethnological objects related to Hopi and Navajo cultures; Triassic invertebrate and vertebrate fossils collected from the Chinle Formation; representative geological specimens collected from the Chinle Formation; a photographic archive; and a biological collection.

The magnificent Grand Canyon awaits today. Leave your car at the hotel and take the free shuttle bus from the Canyon Plaza Visitor Center to some of the best viewpoints along the South Rim. Alternatively you can enjoy the 25-mile Desert View scenic self-drive. Visit the Yavapai Observation Station, the Tusayan Museum, and the Kolb Brothers Studio for more fabulous views and a perspective on the cultural heritage and history of the Grand Canyon. Treat yourself to a helicopter ride over the North and South Rims of the Canyon for thrilling bird's eye views of the Colorado River more than a mile below.

Welcome to Las Vegas, a city created to provide non-stop entertainment. Enjoy two days here, wandering The Strip, enjoying shows, taking in theEiffelToweror catching an adrenaline rush on the Stratosphere. For a break from the action, tour the world-famous Hoover Dam, or, for a preview of the natural wonders to come, go for a hike or scenic drive through Red Rock Canyon National Conservation Area. Museum lovers will enjoy theImperialAutoMuseum, the Bellagio Gallery of Fine Art, and the Liberace Museum, to name just a few. Whatever you choose to do, remember that “What happens in Vegas stays in Vegas!

There's no question that Route 66 ends in Santa Monica, although there is great debate and speculation about where the actual ending point is located. Route 66 is said to end a block away from the pier at the intersection of Santa Monica Blvd and Ocean Ave. A bronze plaque dedicating Route 66 as the Will Rogers Highway is located across the street in Palisades Park, a few feet from the Santa Monica Visitor Center Kiosk. On November 11, 2009, the Santa Monica Pier was designated as the official Western Terminus of Route 66 by the Route 66 Alliance, an organization that promotes and preserves the historic roadway between Chicago, Ill. and Santa Monica, CA. Stop by for a photo at The End of The Trail Sign. No matter where the ending point is, Santa Monica is a wonderful place to celebrate the Spirit of Route 66 and its many contributions to American culture. Here you can pretty much count on sun, since the area enjoys 340 days of sunshine a year and a constant gentle ocean breeze, as well as a pristine beach that the city of Santa Monica cleans and rakes the sand daily. Have a cool drink and hit the boardwalk. Tomorrow’s plenty of time for exploring.

Attractions in Los Angeles abound! Driving to get to them in Los Angeles is a way of life – and a glamorous one at that. So roll down the windows and head out on one of the fabulous scenic drives around the city. Cruise the Sunset Strip; check out the entertainment hot spots on Hollywood Boulevard, or journey through the city's historic, cultural and architectural roots along Wilshire Boulevard. Los Angeles is a city of suburbs that includes Hollywood, Beverly Hills, Santa Monica and Anaheim, stretching east into the California desert. Also you can visit "the Mouse" at Disneyland, window shop on Rodeo Drive, and take in any number of LA's fabulous museums and attractions. The view from the Getty Center, sitting high above the city, is as spectacular as the art collection inside.

Daily departures throughout the year.