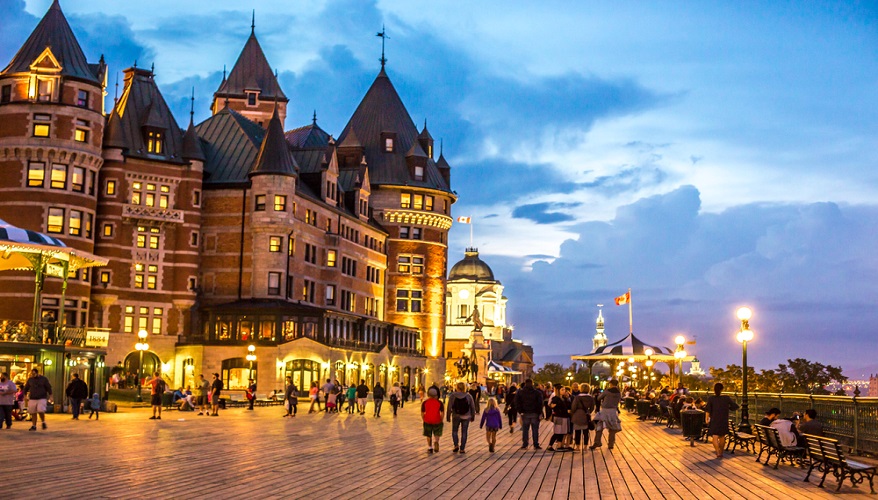 Quebec and its largest cities foster a vibe that is unlike any other in Canada, or North America. The people who are lucky enough to call Montreal or Quebec City home are incredibly proud of their French heritage and the influence of their European cousins is undeniable as you walk amongst the city streets.

The jewel of Quebec City's crown is Old Quebec, the only fortified city in North America and a UNESCO World Heritage Site. Le Quartier Petit-Champlain, sandwiched between Upper Old Quebec and the waterfront, is jam-packed with amazing museums, chic restaurants, bars, cafes and shops. In Lower Old Quebec, discover the picturesque Rue du Petit-Champlain and Place-Royale, the city's original square.

La Citadelle is North America's largest fort and in touring its grounds, it's not hard to visualise the battle between the English and French over this land.

Also be sure to visit Terrasse Dufferin, a long broadwalk beside the infamous Chateau Frontenac, which offers amazing views of the St. Lawerence River. In the summer, the walkway is busy with street performers, in the winter, it becomes a toboggan run.

Like Quebec City, Old Montreal is the heart of the city. It is home to a host of beautiful 19th century buildings as well as newer, more comtemporary structures, excellent shops, art galleries, museums, restaurants and cafes. The Basilique Notre-Dame is the jewel in Montreal's crown, a 19th century Gothic Revival masterpiece, that was built, in its current form, in 1829.

Rue St-Denis is at the centre of the Latin Quarter and home to many theatres, cinemas, street art, cafes and restaurants.

Dig into a bowl of the Canadian classic dish poutine (chips, cheese curds and gravy; delicious), which originated here in Quebec, and enjoy!

Some of our favourite hotels in Quebec City

Hotel Chateau Bellevue: A charming European style inn situated with in Old Quebec, close to The Citadel as well as other attractions and restaurants.

Fairmont The Chateau Frontenac: A historic and luxurious chateau style situated in Old Quebec, on the shore of the St. Lawerence River.

Some of our favourite hotels in Montreal

Chateau Versailles: An elegant and charming hotel located on the famous Sherbrooke Street, near shops, museums and nightlife.

Fairmont The Queen Elizabeth: Luxury hotel situated in the heart of downtown, just steps from attractions, shops and restaurants.